Lobuche to EBC to Kathmandu

It’s been twelve days since I left South Africa and today I will finally make my way to Everest Base Camp. I’ll climb for the first time through 5000 meters ASL.  For this final section of the trek I return to my diary.

It was a long day of walking on loose rock. Traffic was very busy as the footpath is pretty much a single lane.

There’s amazing scenery in the Khumbu amphitheatre. Pumori, Lingtren, Khumbutse and Nuptse towers above all around us.

I’m pleasantly surprised by Gorak Shep. Its setting is spectacular.

After lunch we set off for Everest Base Camp. It feels like a long walk and I’m tired. No power in legs.

Normally I can run 4 kilometres in 22 minutes but this leg takes us four hours to complete. Progress is incredibly slow.

EBC is supercalifragilisticexpialidocious. It’s situated right next to the Khumbu Glacier and we can clearly see the impressive and feared icefall. A Japanese couple gets engaged. She’s a keeper in my books.

Before the trip I had read somewhere that the highest altitude where traces of civilizations were found is around the 17000ft mark.  I find it fascinating. As it was so long ago there would have been no way for them to tell at what altitude they were living at, except that if they went up any higher they wouldn’t feel too good. Mountaineers talk of the death zone as 8000 meters and above. The real death zone is in fact much lower.

We take photos and spend some time just taking in our surroundings.

This is probably the closest I’ll ever get to China. Tibet is scarcely a kilometre away via the Lho La pass.

I feel much stronger on the way back to Gorak Shep. A local on a horse speeds by us towards base camp. That is one well acclimatized horse!

At Gorak Shep we get upgraded to a better room. The first one which was allocated to Wayne and I was two by three meters without a window and no space to walk or unpack our bags. We’re very grateful.

I slept badly…short of breath the whole night and excited for the climb to Kala Patthar.

We set off at 04:00. Nga-wang sets a hard pace. Close to the top I’m completely exhausted.

It takes me one hour and forty minutes to reach the summit. We’re one of the first groups at the top and I get a good spot for my tripod.

The first light and glow from the mountain summits are surreal.

The temperature is -9°C before sunrise and a cold wind blow up the mountainside from the valley.

There’s lots of wind and snowdrift on Everest. The weather is clear and the view is stupendous.

Many more people are making their way up to Kala Patthar from Gorak Shep.

My hands are instantly cold when I take my gloves off to take photos. It’s almost impossible to get warmth back into them again.

As soon as the sun peeks over the South Col I make my way down to Gorak Shep. During sunrise the light was good for photography but I can’t help to think that it would be so much better in the late afternoon.

Back at Gorak Shep I’m dead tired. After breakfast we still need to descend to Lobuche.

I have a blissful afternoon nap from 2-4pm.

The usual late afternoon mist rolls in and there’s no opportunity for golden hour photography.

The stuffy and busy dinner hall irritates me. I’m early in bed. 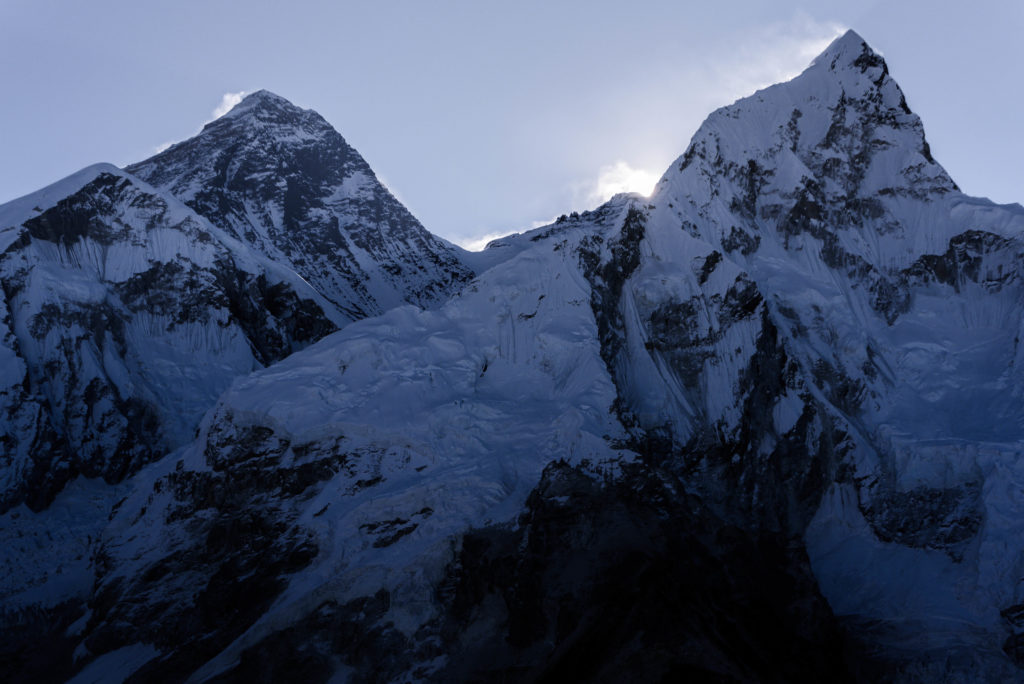 I’m irritated by the noisy lodge, messy toilets and crowds. I’m done with Hotel XV. Apparently you get shithole countries. This is definitely a shithole lodge.

We set off to cross the Khumbu moraine. Rock, rock and more rock.

We’re almost through on the eastern end when we’re stopped dead in our tracks by a glacial pool. After an hour’s frustrating and risky tip toeing on loose rock to look for a crossing point we come to the conclusion that there’s no way through to Kongma La.

Our snail’s pace and the weird weather make us decide to abandon the pass. It’s already after 10am. To climb 600 vertical meters at altitude and walk the remaining 8 kilometers to Dingboche will be a tall order even if nothing else goes wrong during the remainder of the day.

We decide to bail out to Dughla and retrace our steps to Dingboche that way.

Just as well… while boulder hopping I pick up a sprain in my left Achilles tendon. It gets progressively sorer as the day wears on.

Instead of going straight down to Dughla we detour towards Chola Tsho to get magnificent views of Cholatse.

It’s an easy walk back to Dingboche with Ama Dablam creating a dramatic backdrop as it plays hide and seek between the clouds. A total of 22 kilometers hiked for the day.

Back in Dingboche I take my first shower in seven days.  Words can’t describe the feeling of being clean again. It’s Rs500 (ZAR70) for the two minute shower. I gladly would have paid double that.

More cold weather as clouds move in during the afternoon.

A bit worried about my achilles tendon. We still have 45 kilometers to Lukla and I need to get there on my own steam. 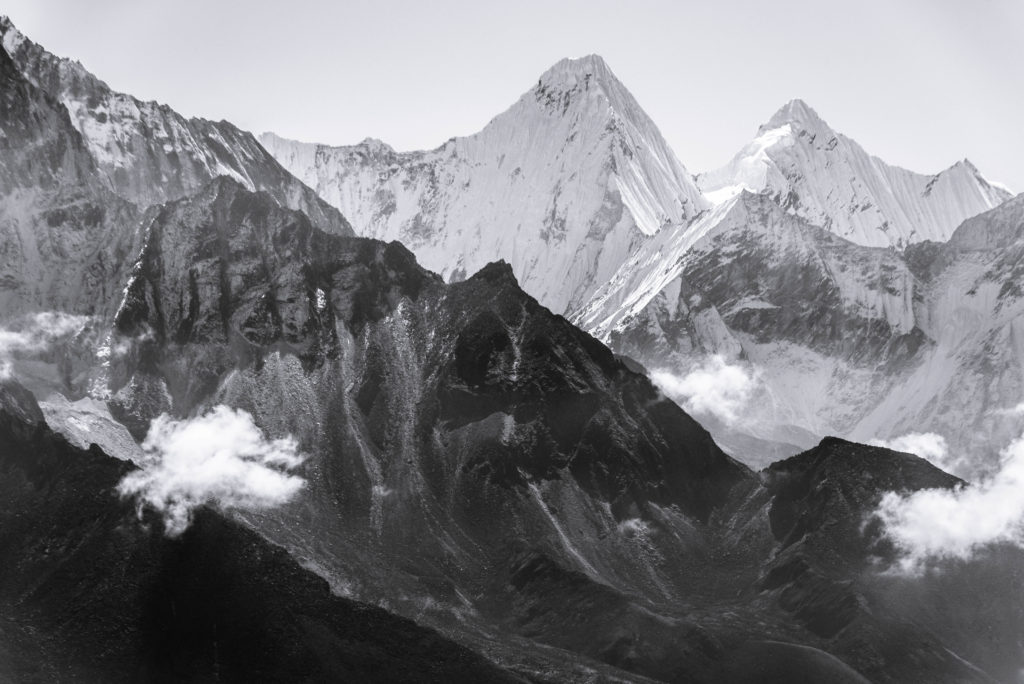 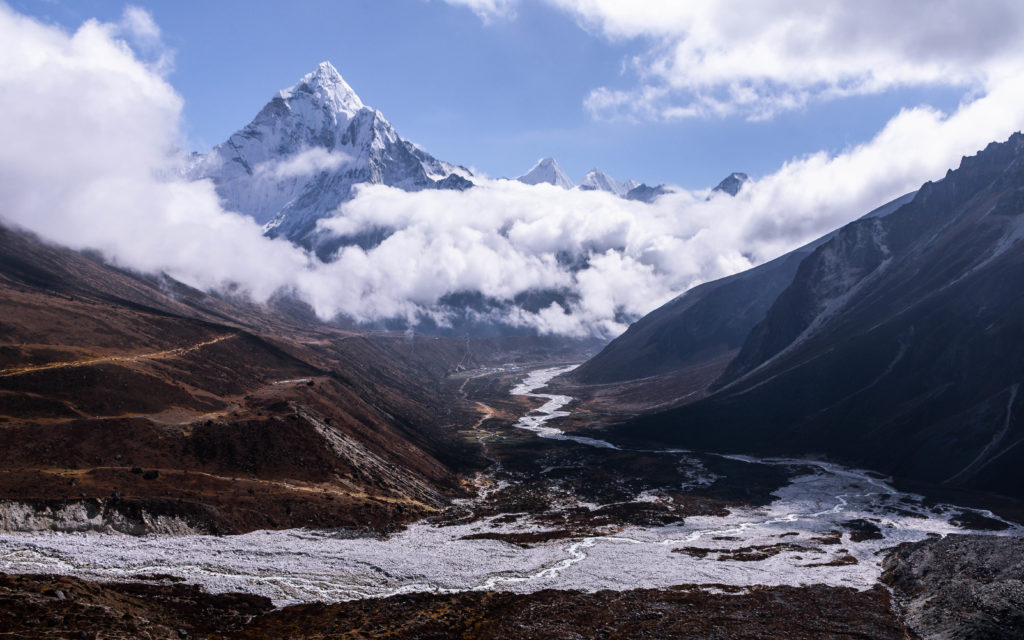 The cold has followed us down from Lobuche. At sunrise the room’s windows are frosted over.

Pancake and honey for breakfast. Ram’s Moon Light Lodge is by far our favourite lodge for the entire trek.

I still have breathing difficulties during sleep. Hopefully it will cease when we get below 4000m.

Trekking to Pangboche(3990m) today and then in the afternoon to Ama Dablam Base Camp (4600m).

There’s a biting wind into our faces. My ankle soon starts to flare up.

I decide to sit out Ama Dablam Base Camp climb so I can rest my ankle. While the others are away I take some long exposure photos down at the river. It’s a long afternoon in the tea room as the weather again moves in with heavy mist. At dusk I start to become a bit concerned about the other three not having returned. Luckily soon thereafter they arrive. It seems they had a great time. 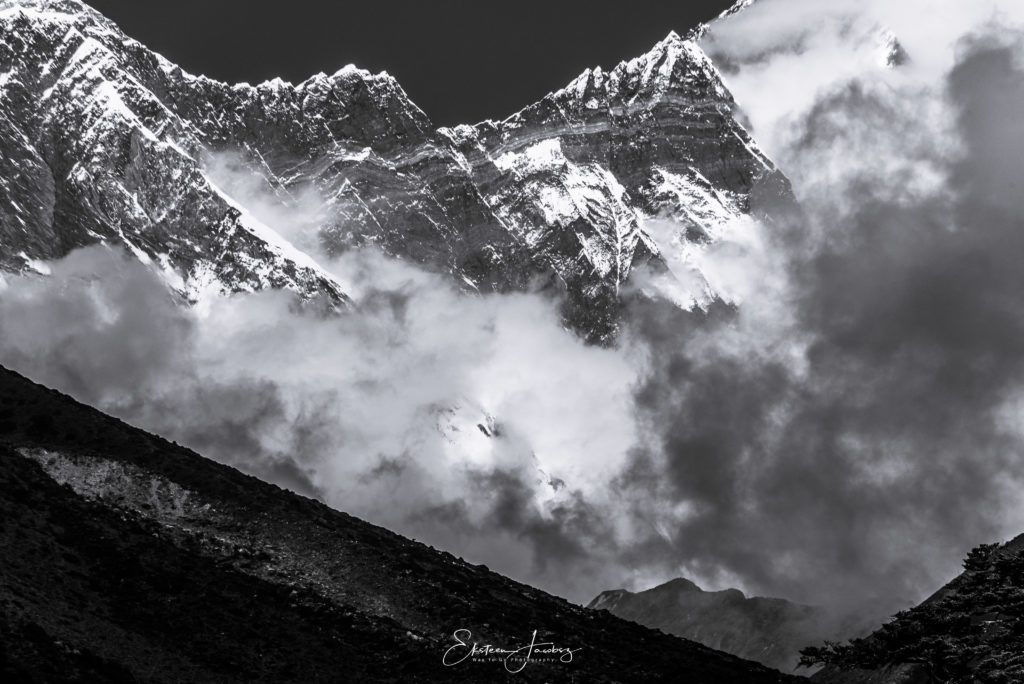 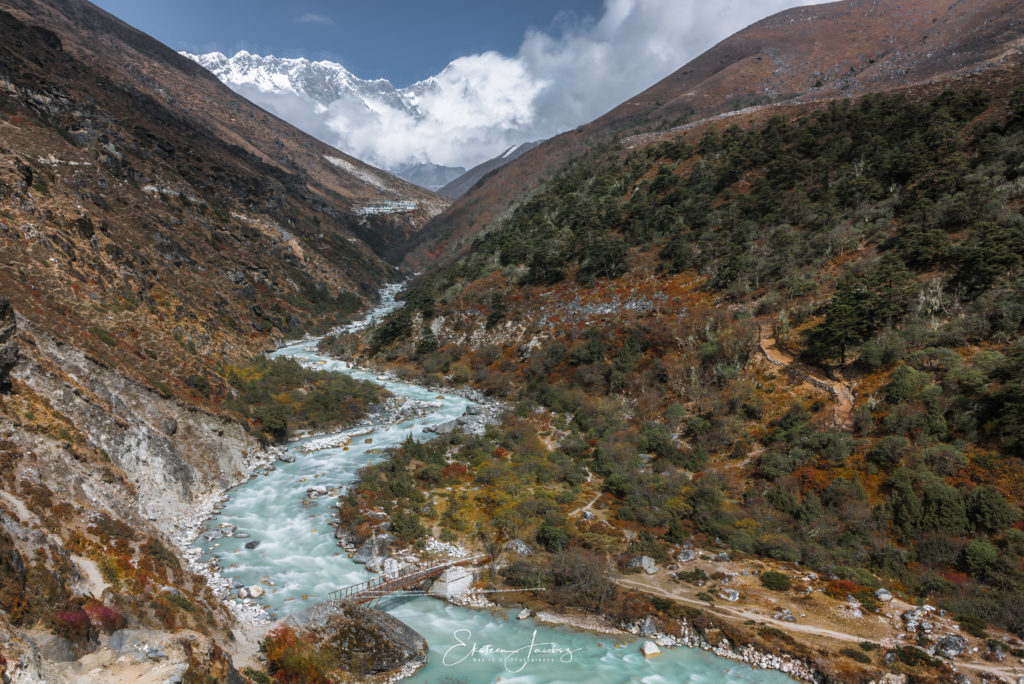 I got up at 5am to photograph the sunrise. While leaving the room I accidentally locked Wayne in. He somehow escapes and soon joins me outside.  As compensation for my sabotage he steals my ideas.

We can see climbers’ headlights near the summit of Ama Dablam.

The colours on the mountains’ peaks at first light change from soft purple to dusky pink to glowing orange.

With more anti-inflammatories and rest my ankle feels much better this morning.

It’s an uneventful day. There are lots to reflect on as we descend. On the last quarter my ankle is again very uncomfortable. I’m thankful that the injury happened on the way out and not earlier. It could have been disastrous.

Wayne and I get the best room in Namche’s Sona Lodge & Restaurant. No. 308.

Soon we’re off to Cafe De 8848 and Illy Espresso Bar for a well-deserved cappuccino and Oreo Cheese Cake.

We wash it down with a celebratory pint at the highest Irish Pub in the world. 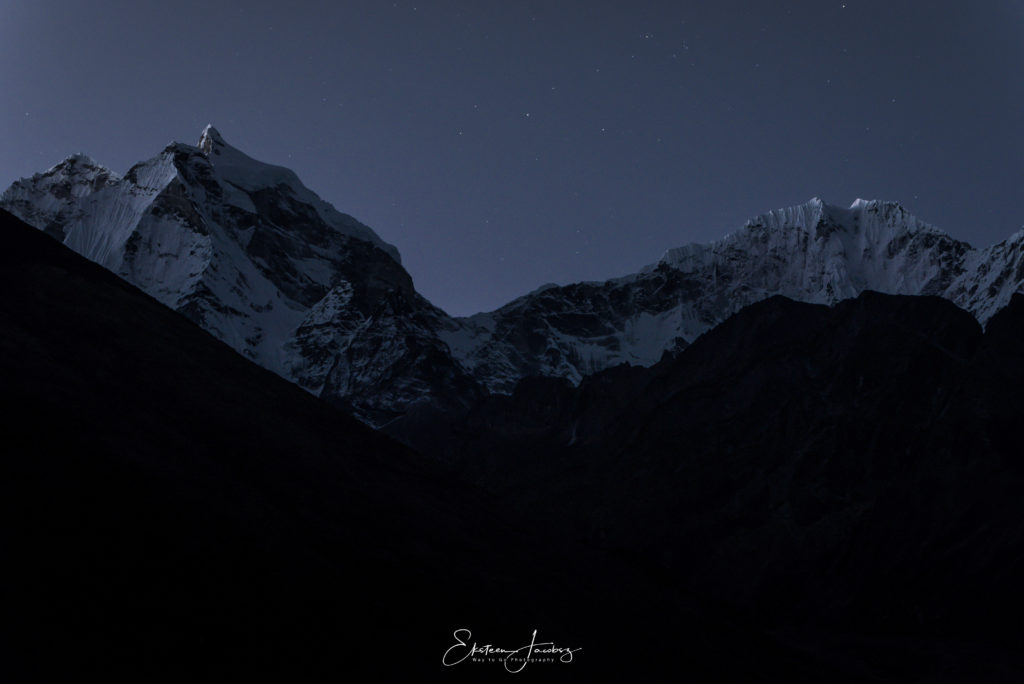 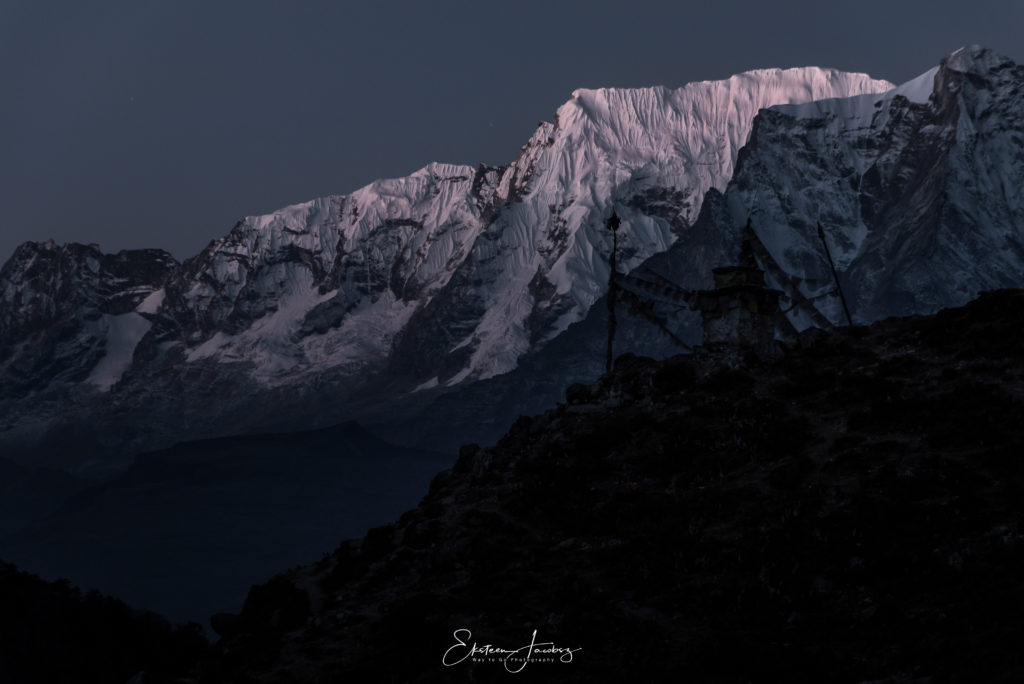 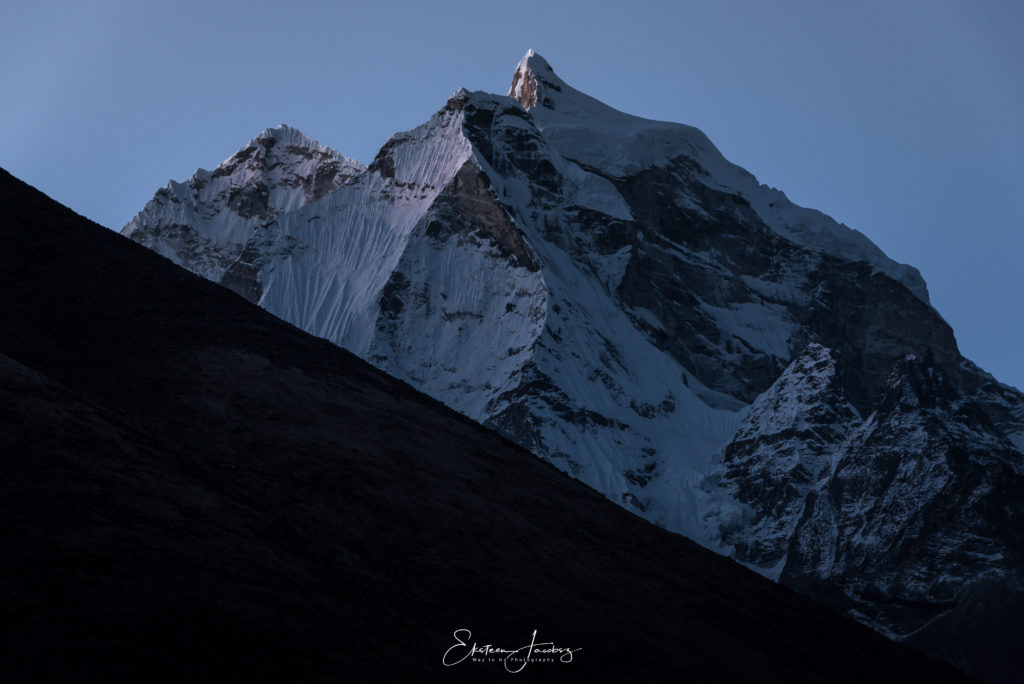 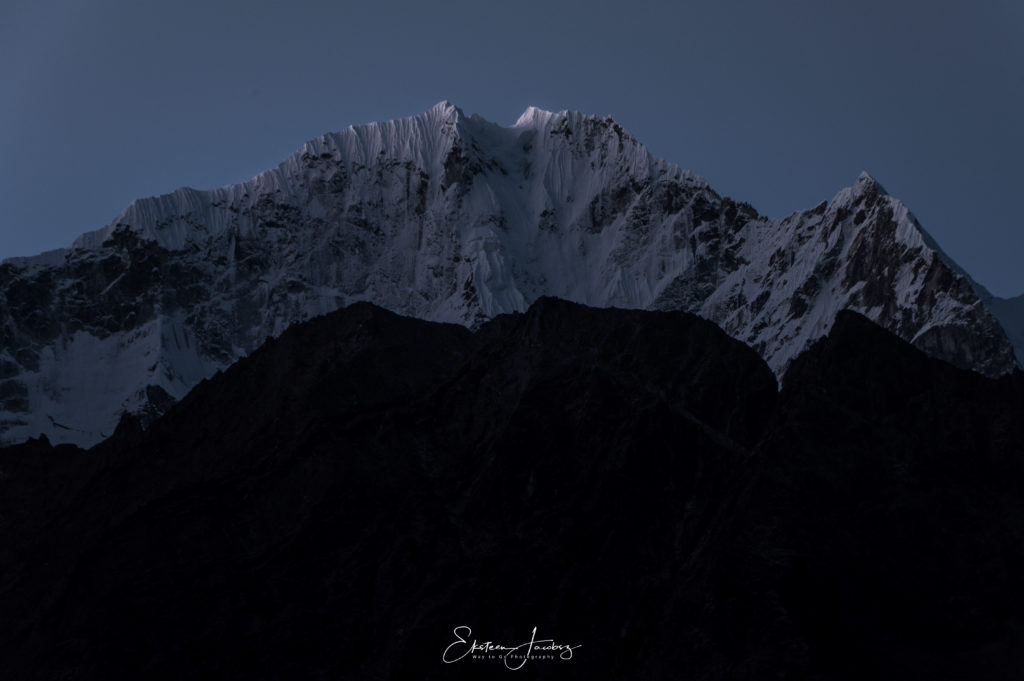 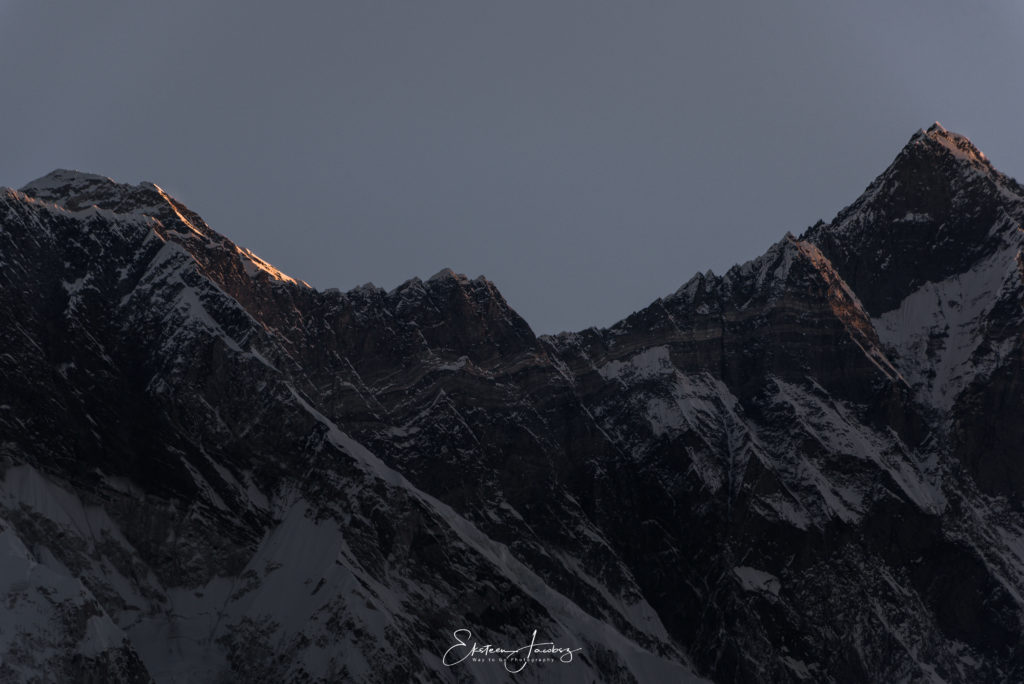 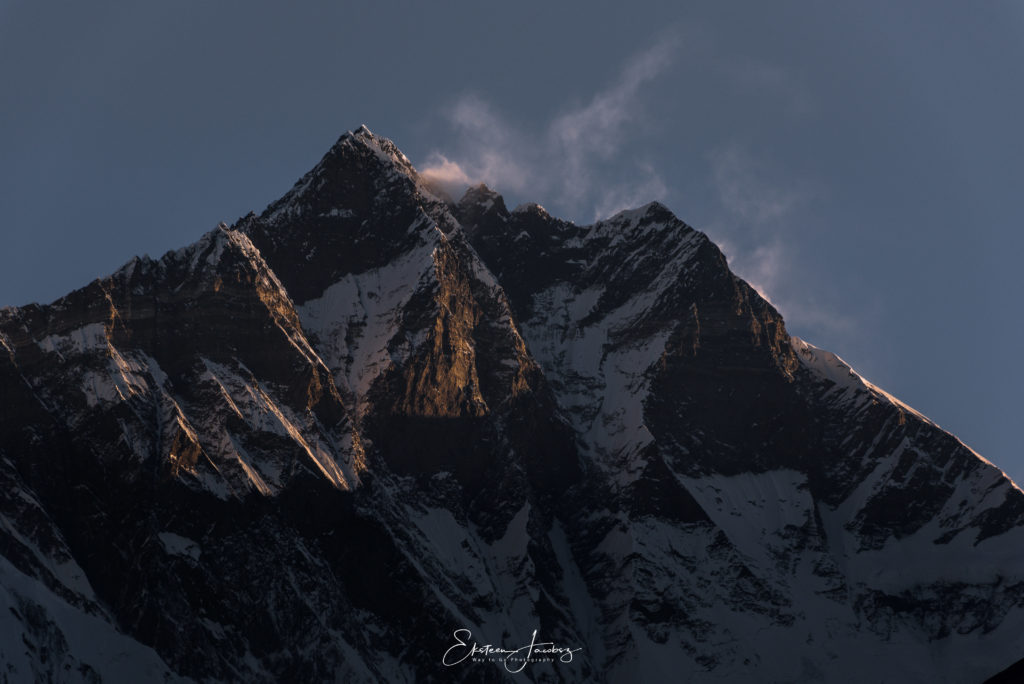 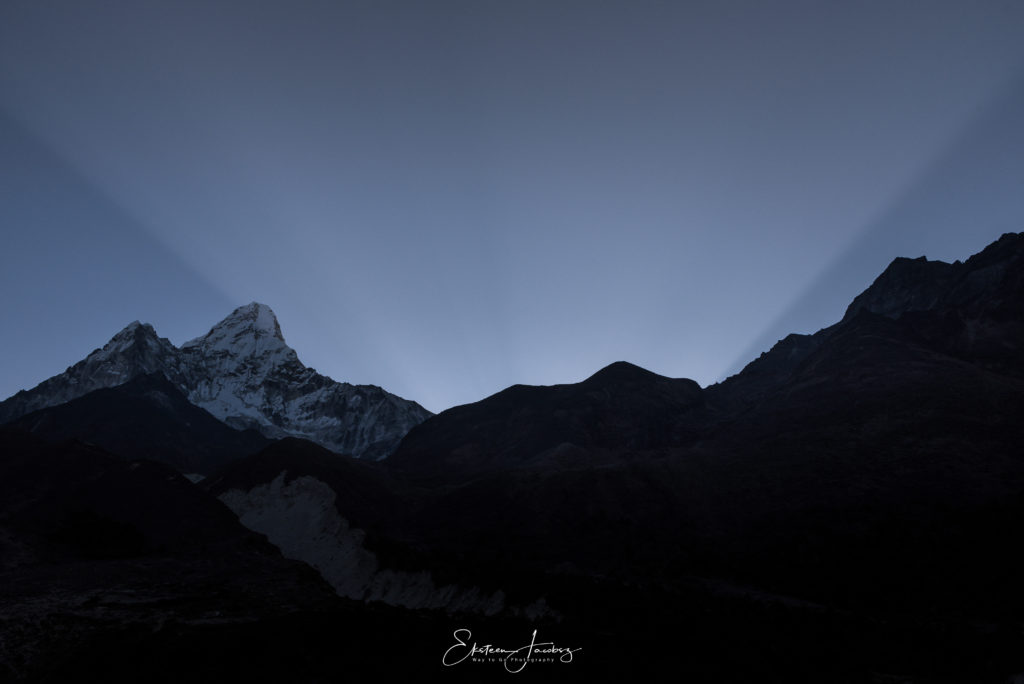 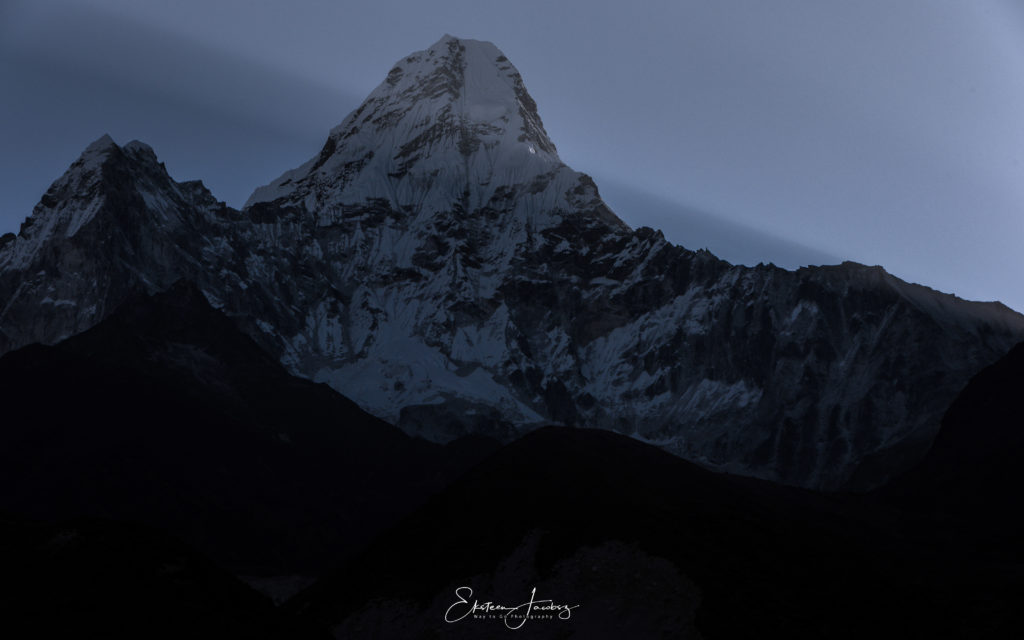 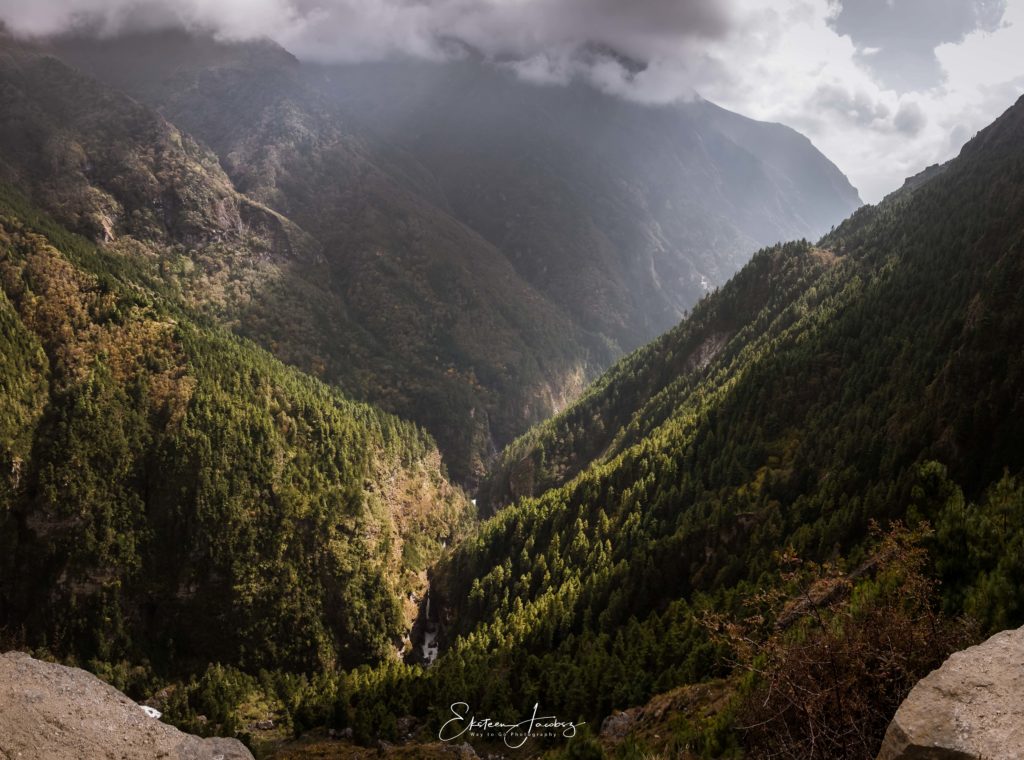 Walking out to Lukla. 18km.

Best uninterrupted sleep I had in eight nights.

We see Kongde (6168m) right in front of Namche for the first time due to perfect weather.

We leave Namche just before 9am.

There is heavy traffic down the pass to the Larja Bridge.

A funny moment ensues as yaks are turned around on the bridge. Trekkers with big white eyes hastily retreat before the bewildered beasts.

My ankle flares up from Phakding. 3 hours of hiking still to Lukla.

Head down and bear it. Tired and cold as we arrive in Lukla. I’VE MADE IT! Today was just a slog.

Winter is on the way. There’s a chill in the air that wasn’t present when we arrived two weeks before.

Our flight to Kathmandu is scheduled for 09:30.

There’s clear weather early in the morning. It snowed during the night on the upper slopes.

Check-in is nerve wrecking as it happens suddenly, very fast and chaotically.

Then the long wait starts as the weather moves in. We can’t leave the terminal while checked in.

It’s bone chilling cold in the waiting room. I wasn’t prepared to spend time there. I’m not dressed appropriately and pay the price with an uncomfortable and boring day in the terminal.

Our flight is finally and predictably cancelled at 3pm. Unbelievable!

Wayne and I are off to ILLY for warm coffee, a brownie and food.

We walk back to the lodge in the rain.

The return to earth

The next morning all hell breaks loose at Lukla Airport as we at last get a weather window. There’s a massive backlog from the previous day’s delays. It is something to behold how fast the turnaround time is for incoming aircraft. I timed a few arrivals and departures. From landing, stopping, disembarking passengers and off-loading luggage to the new passengers climbing on board and their luggage loaded, the plane starting up again, taxi-ing and taking-off…5 minutes flat!!! It is a well-oiled operation that does deserve respect and admiration.

Booked for a 9am departure we finally take-off at 11am just as the weather is closing in again. There are some squirmy moments after take-off as we pass through patches of cloud. Not the greatest feeling when you see, while in the clear, mountains all around you still rising high above the aircraft.

After an interesting day tour of Kathmandu I finally board my Emirates flight the next day to return home.  This Himalayan trek is an experience that will stay with me for a lifetime. Many people ask me how it was and I find it hard to find the correct words to do the experience justice. Each time I fail miserably. Descriptions like, “Unbelievable!”, “Unforgettable” and “Epic!” is all I can utter. How do you express the feelings of wonder and awe those giant mountains impress on your virgin eyes? How do one verbalise your thoughts on a culture that you know precious little about but which had definitely made an indelible impression on your conscience.

The fact of the matter is that no words can do the Himalayas justice. You have to go there to see and experience it yourself. There must be a good reason why the Nepalese are one of the friendliest nations in the world.